The Aviator Hotel is an unashamedly modern and extremely cool hotel bang in the middle of Farnborough - practically on the airport's runway, as the name might suggest, and played host just before Christmas to Tasha & Rob's absolutely superb wedding - my final one of the year. I'd actually first met them both a fair while earlier, when they were guests at Laura & Graham's beautiful summer wedding at Audleys Wood. Now it was their turn, and they did it in style. This such a fantastic hotel to photograph at I hardly know where to begin; the architecture, especially inside and across several floors in the lobby area, is stunning and if you have a strong sense of symmetry and geometric interest, sweeping lines and curves and so on, this may well appeal if you are on the hunt for a wedding venue yourselves right now! The venue is still just a backdrop however, and it was because I knew that they were such a great - and very sweet - couple, and a lot of fun to be around, that I was really looking forward to seeing 2014 out with a bang. 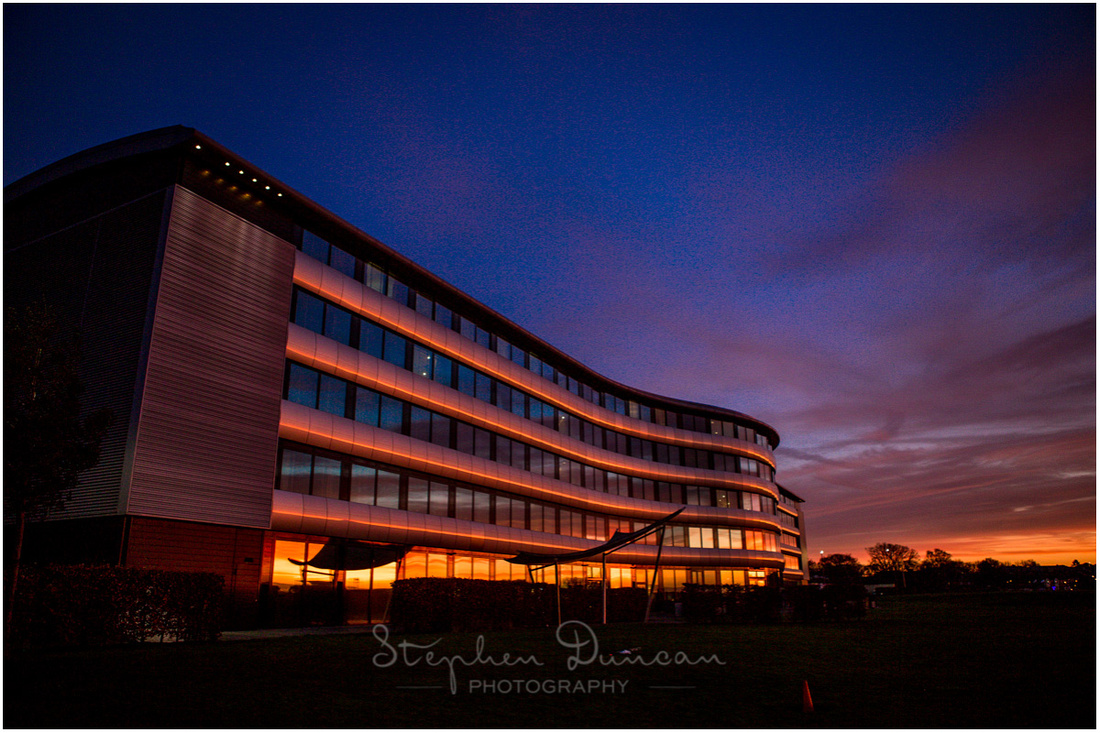 All the bridal preparation was taking place in a suite up on the top floor, and I was able to do a bit of hopping around and whisk Rob away from his guest-greeting duties for a few moments to capture a couple of portraits before the ceremony, while Tasha got into her magnificent dress. The, as the finishing touches were applied, it was time to head downstairs to the ceremony room to catch up with the groom's party in anticipation of that walk down the aisle. 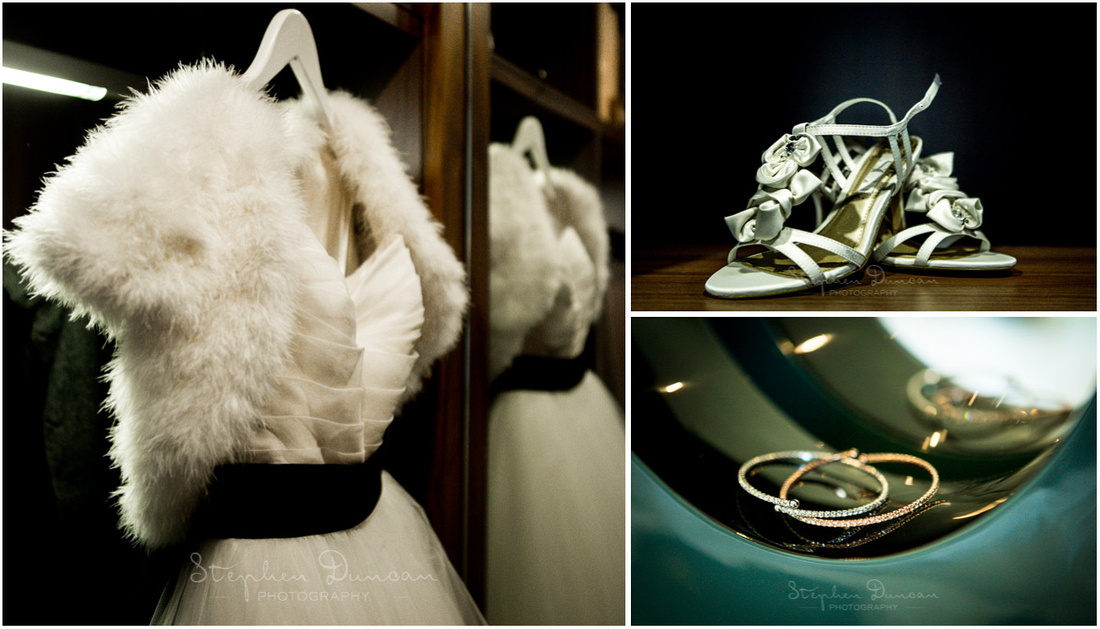 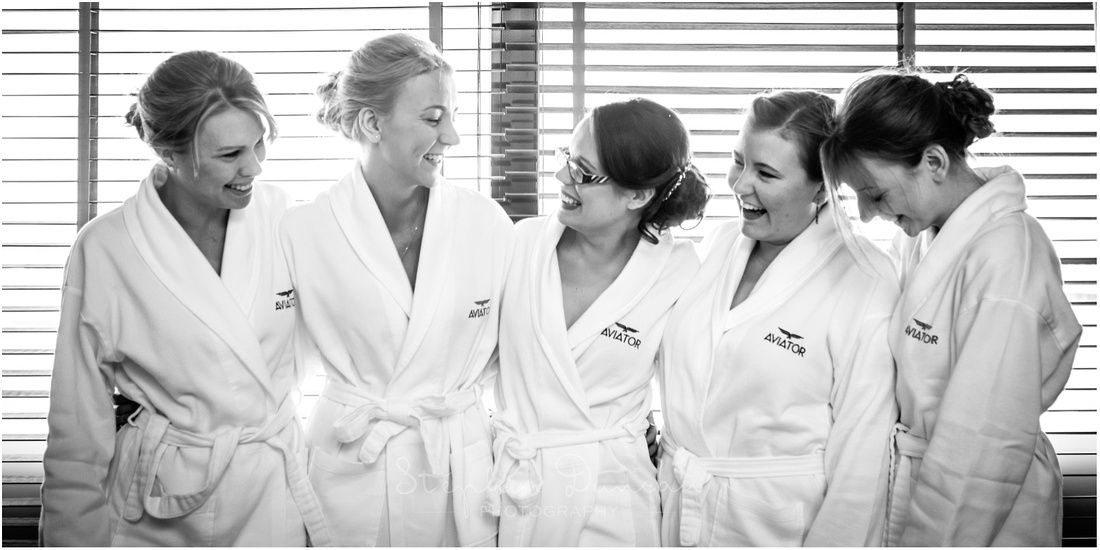 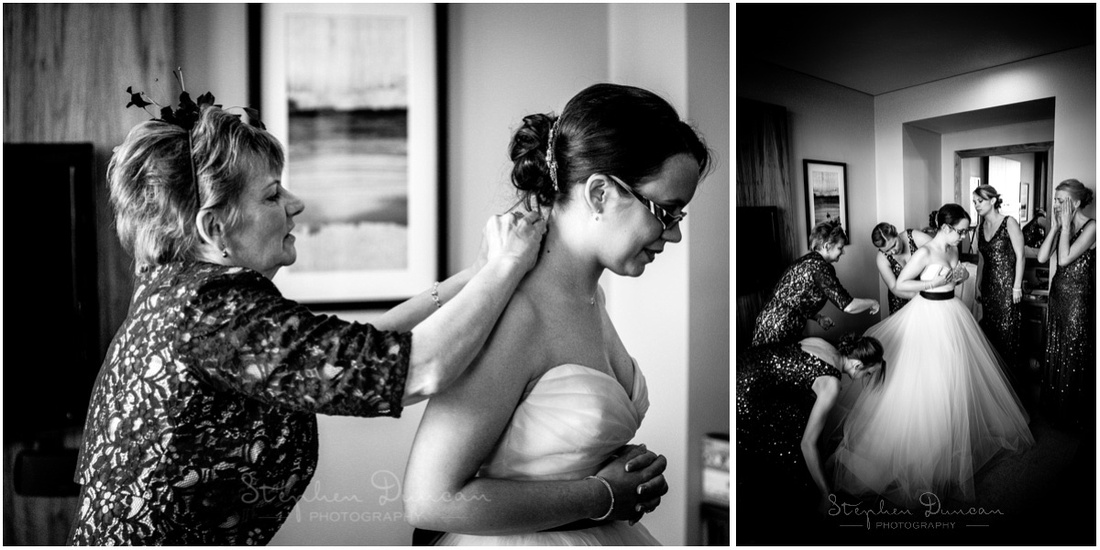 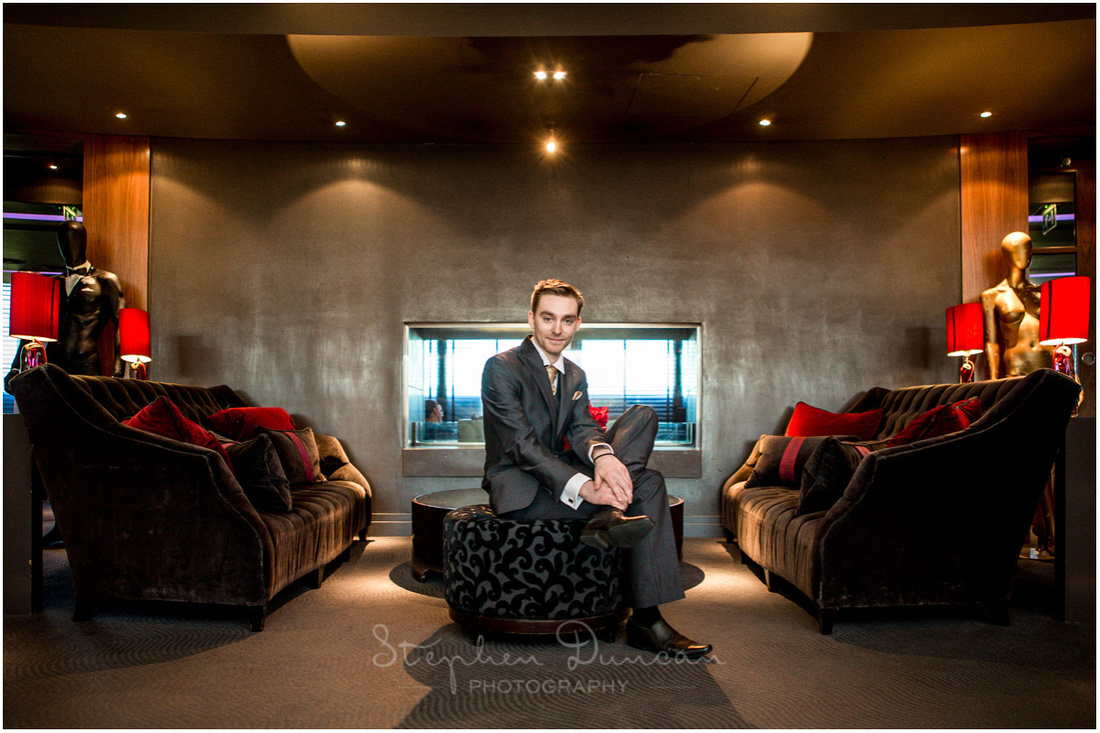 It was quite a room-full for the ceremony - very nearly standing-room only, in fact. The cool winter light was flooding in from once side of the room (so much nicer and more interesting that electric hotel light) as Tasha and her bridesmaids made their way down the aisle to meet a waiting Rob at the front. Looking around the room as the ceremony progressed with the vows, readings and signing of the register I spotted more than a few (happy) tears - obviously this marriage meant a lot to many people, not just the happy couple! 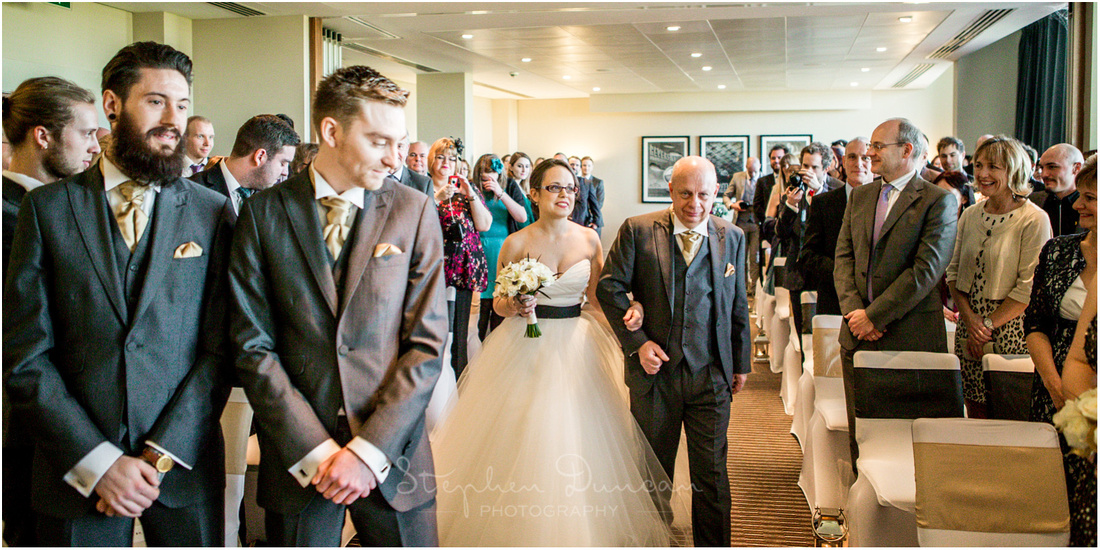 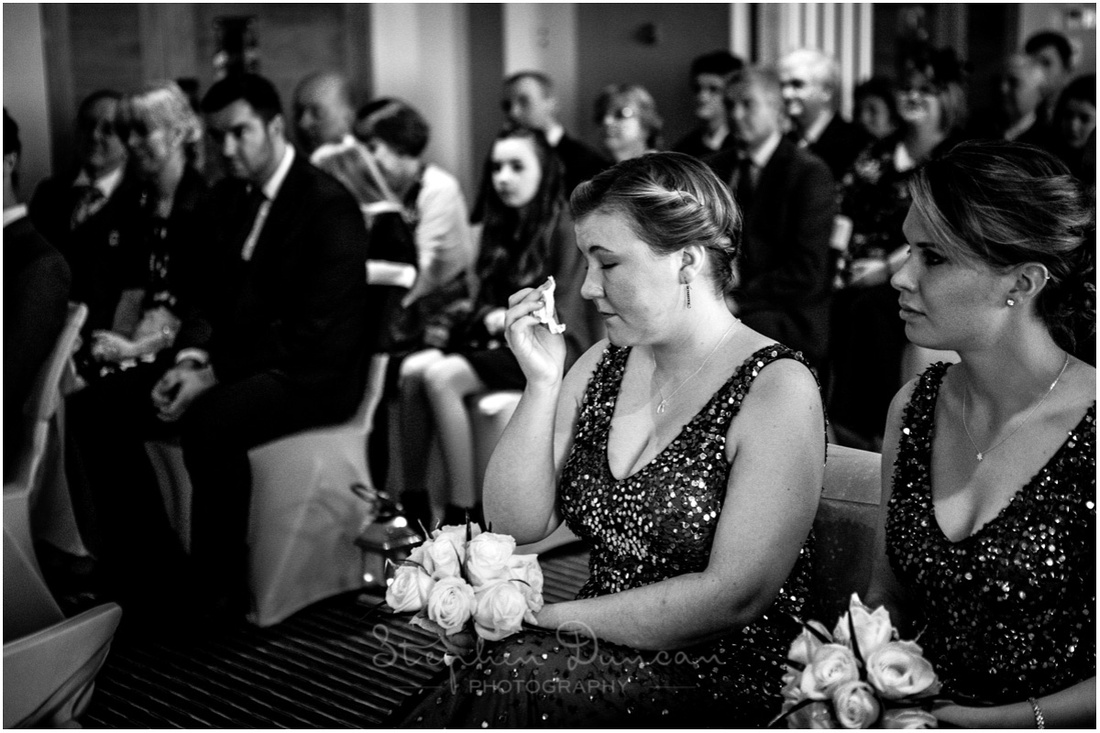 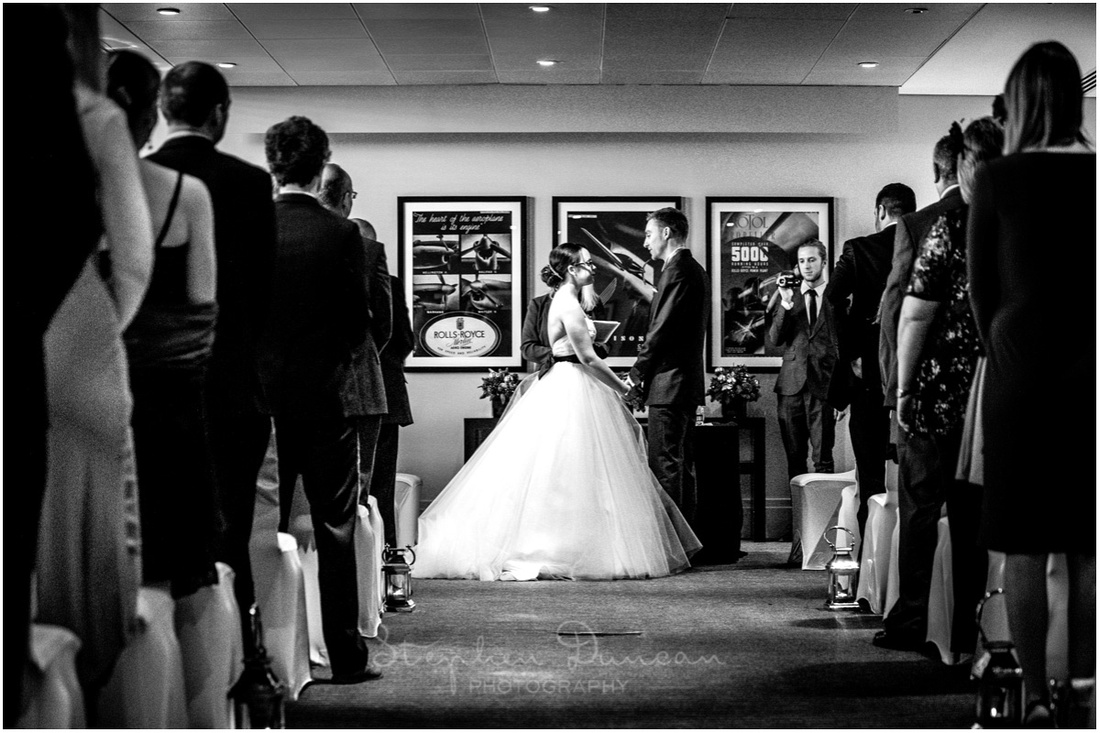 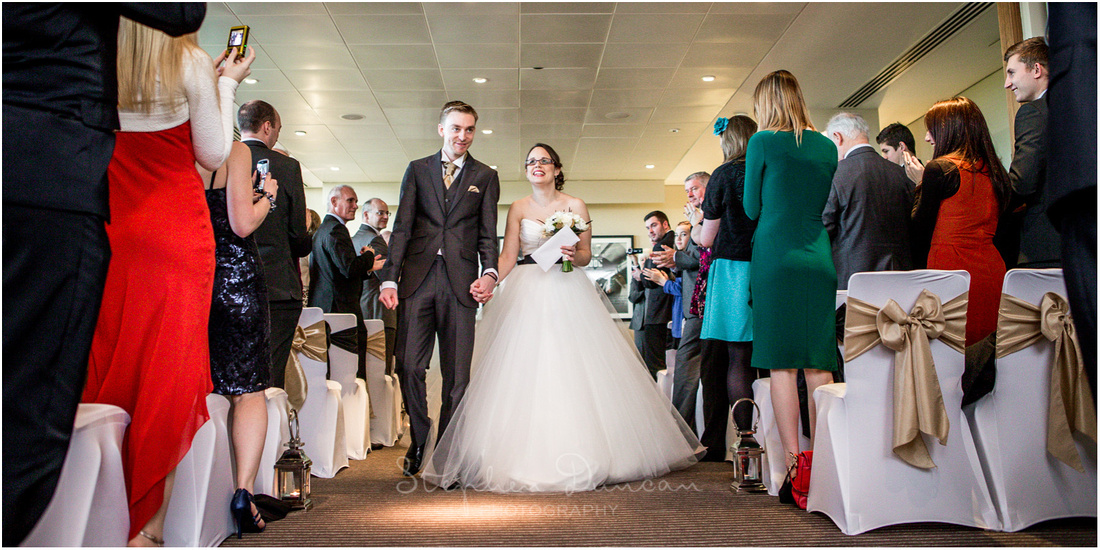 And with rings exchanged, wedding register signed and one beaming couple safely down the aisle together it was on with the celebrations. As guests made their way into the lobby area and bar for drinks and indoor confetti (soooo glad I wasn't the one sweeping that up - there was absolutely tonnes of it and it got everywhere) I slipped into documentary mode, capturing the moments, the laughter and smiles as guests greeted Tasha and Rob and each other, before taking the opportunity before the wedding breakfast to cover some of the more formal group photos (and a few less-formal ones as well as the opportunities presented themselves). These started with a photo I'd had in mind from the very first second I'd walked into the hotel - the lobby is a huge, dramatic, architectural show-stopper with an enormous sweeping staircase heading up to the first floor, and above it level after level of perfectly spherical balcony looking down on the action below. After a little people-juggling on my part (it turns out that the wedding party was so large that in the end I had to arrange them over two floors rather than just the one I had originally aimed for) we got the shot from both above and below. I have to say that I haven't had the opportunity to take many group shots like this before, and it's so nice to be able to give the couple something a bit different when the opportunity's there. One for the portfolio, I think!

Very wisely - as while it was a beautiful, sunny day the temperatures outside really weren't amenable to groups of people standing around for too long - Tasha and Rob were happy to take the family photos indoors, and we had the perfect spot lined up in front of a modern fireplace with sofas, deep rich colours and modern art dotted around. The hotel's got so much to play with it seemed a shame not to make every use of it that we could. 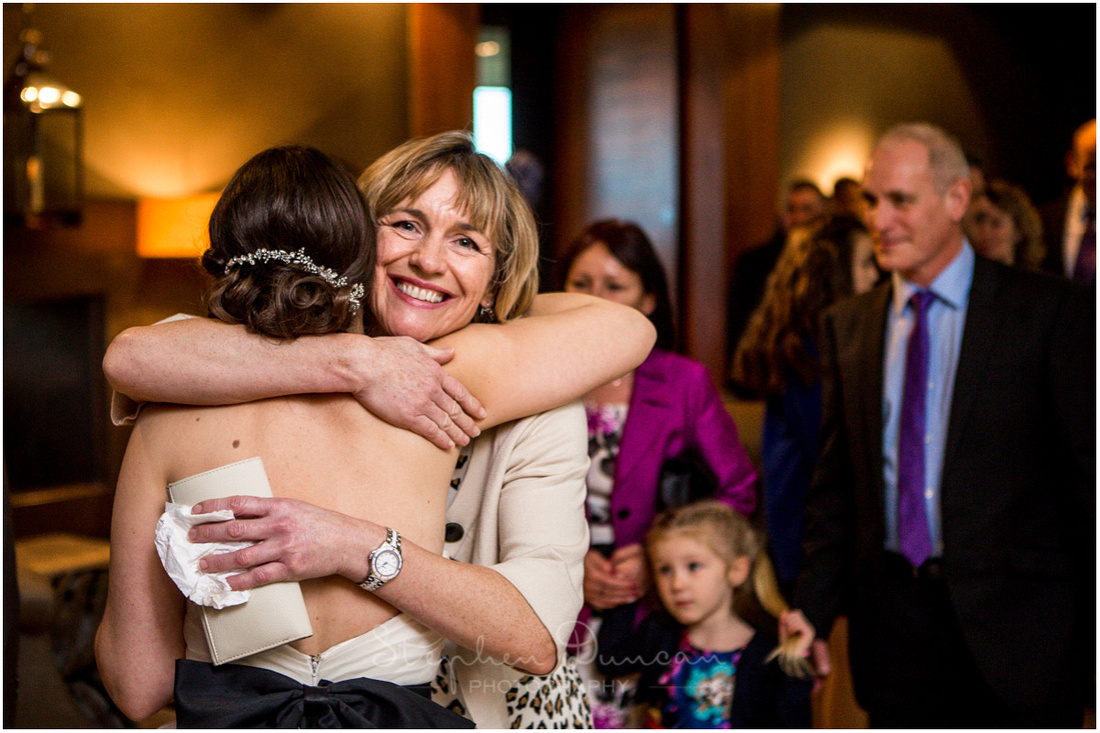 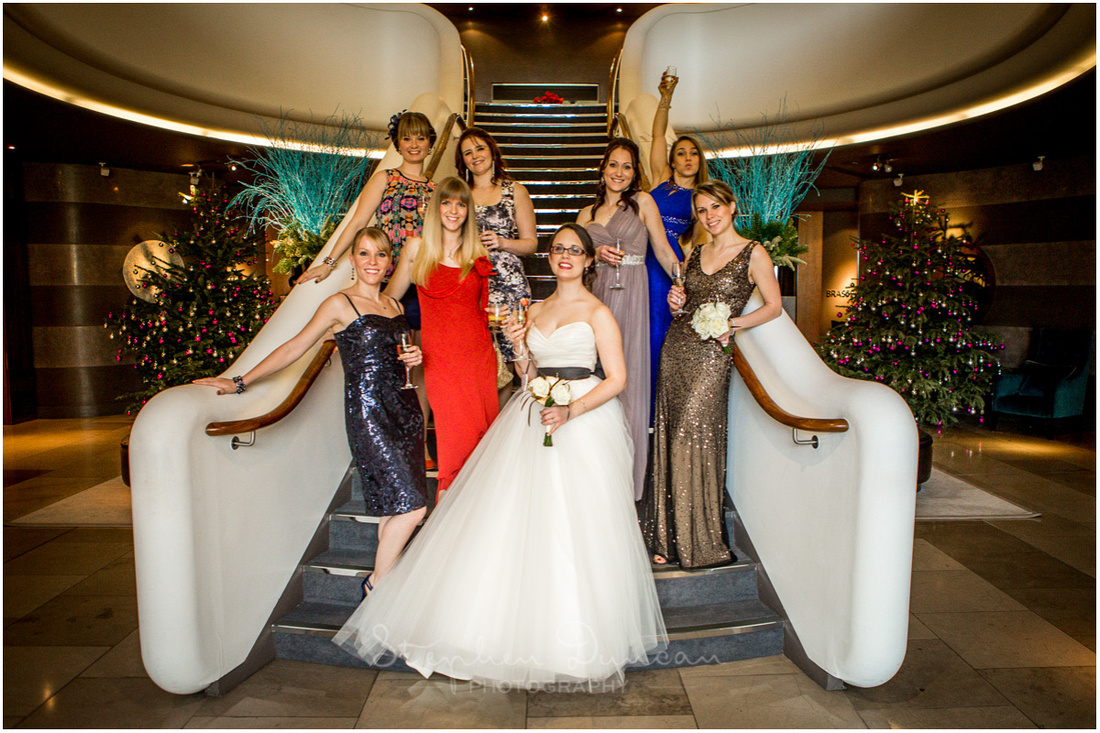 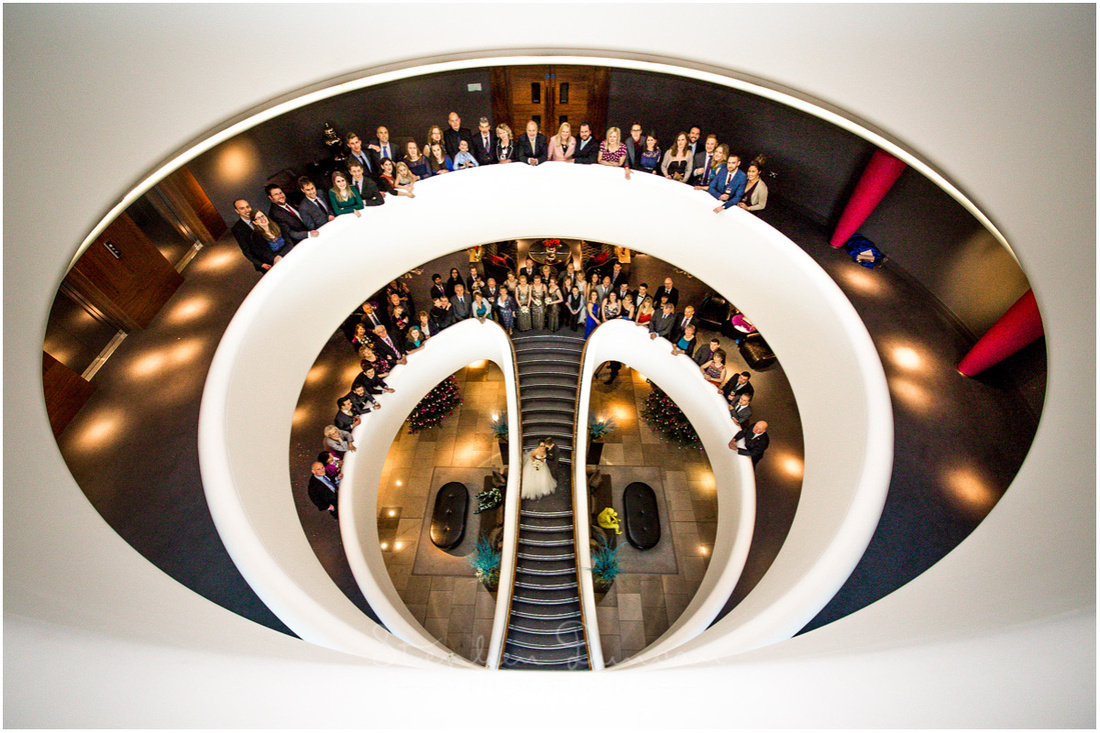 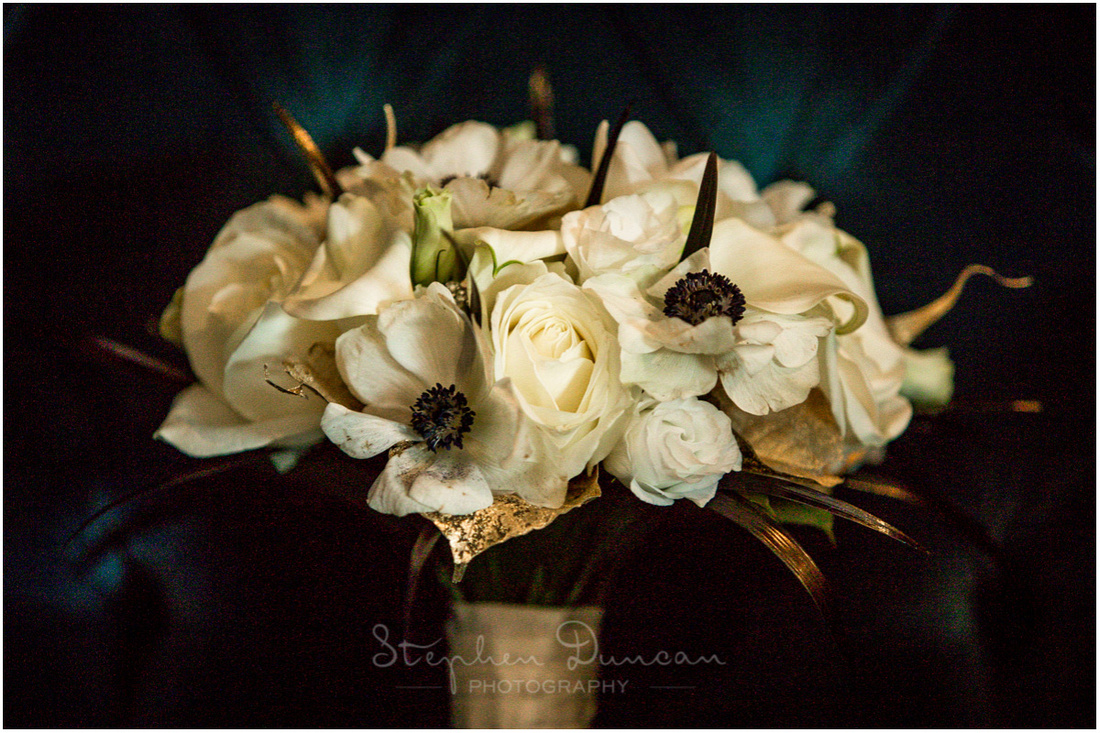 Speeches before the wedding breakfast - often a popular option so that everyone can sit back and enjoy the meal, and well worth it on this occasion as the food looked absolutely delicious. And then, looking out of the window we suddenly saw possibly the sunset to end all sunsets (I seem to have been very lucky this year with sunsets in fact, but the depths of Winter seem to really throw out the best ones) so we just had to grab a couple of minutes before dessert with just Tasha and Rob so that we didn't kick ourselves that we'd missed it. (In fact, I'd clocked that it was on its way when I was outside doing a little reccy for later on, and the view through the tinted glass of the restaurant windows really didn't do it justice - I don't think it was quite what they were expecting when they stepped outside - braving the dropping temperatures, I must add! 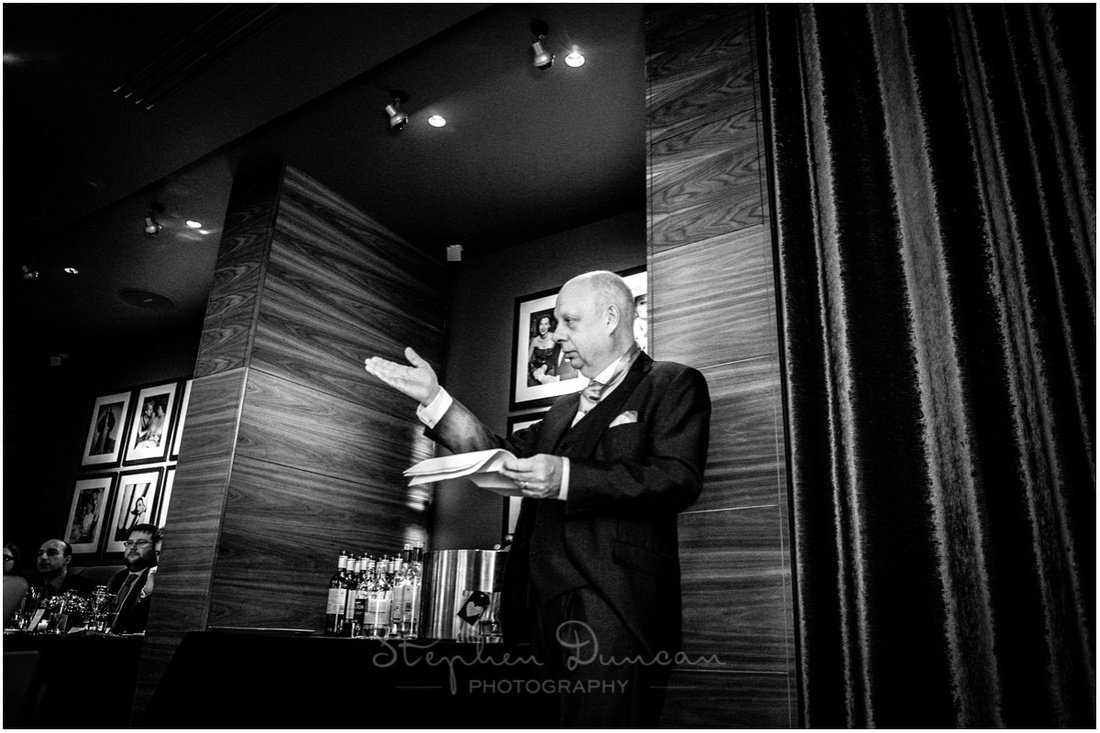 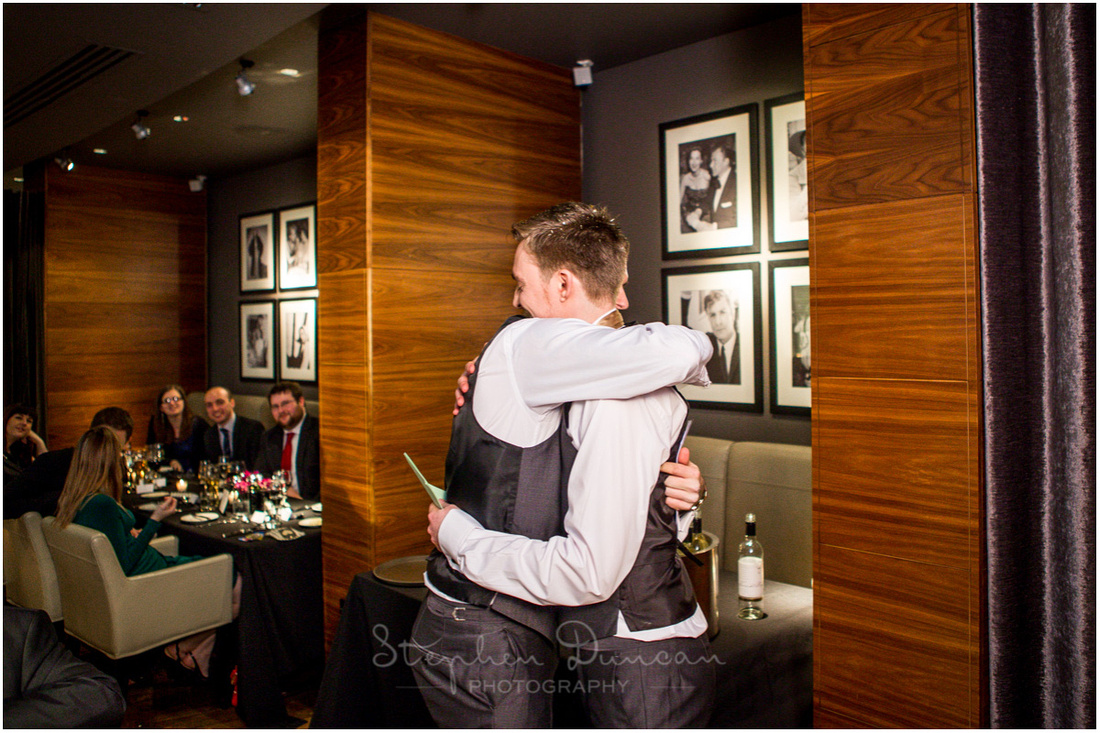 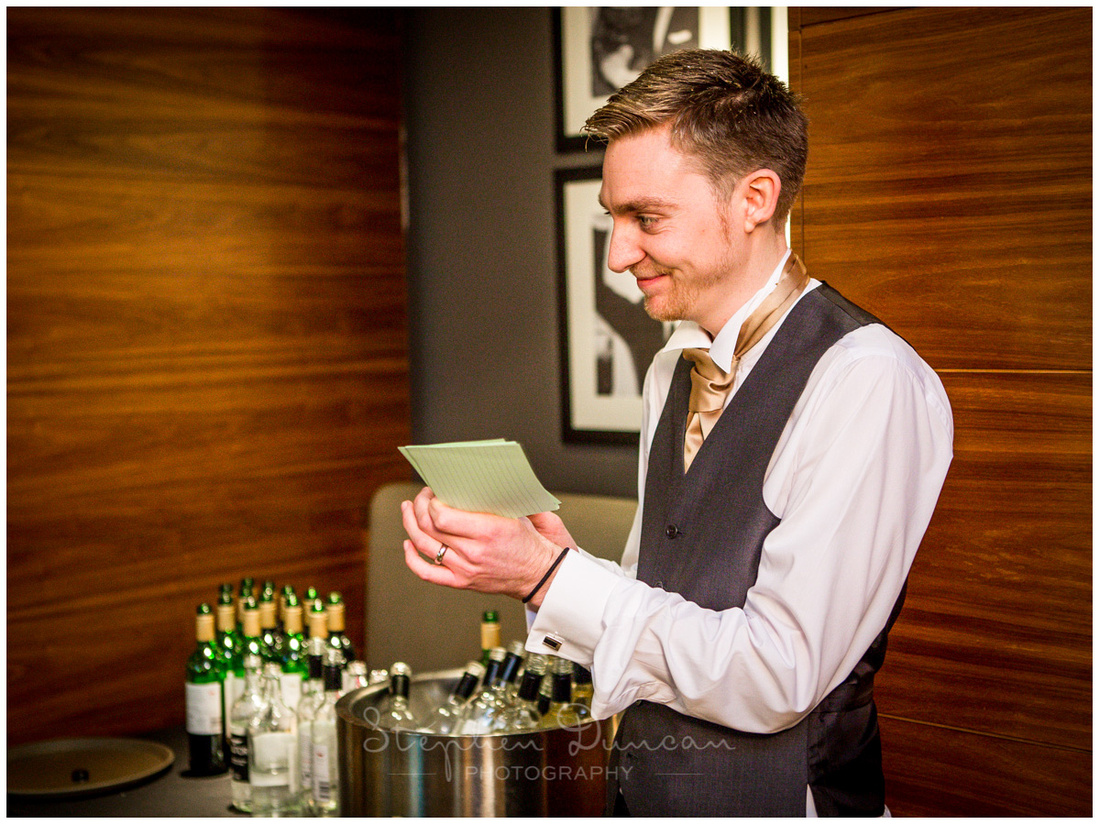 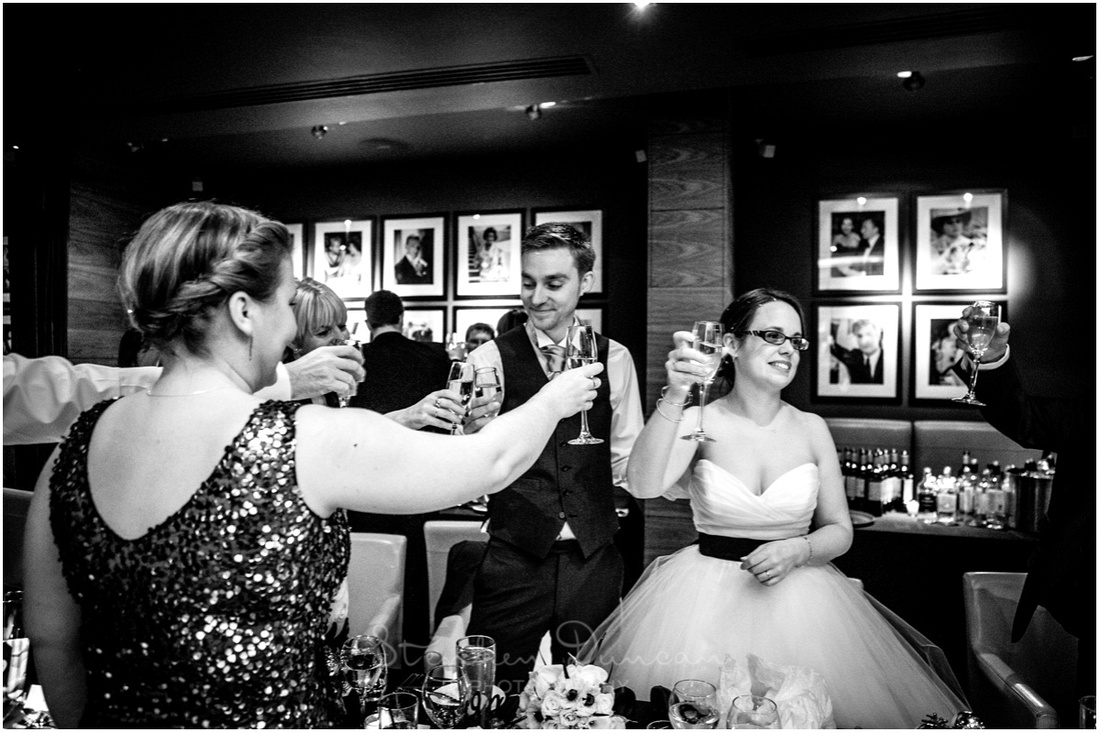 And then back inside for the rest of the meal, before heading upstairs to the evening's reception zone for the cutting of the cake (a beautiful and very different cake, it has to be said, made by Tasha's extremely talented bridesmaid and with added lego characters to boot!) and general chilling out. At this point I grabbed the chance to take Tasha and Rob back downstairs for a few time-out photos (I increasingly enjoy doing these at this part of the day as it's so less disruptive than trying to squeeze them in along with everything else between the ceremony and the wedding breakfast) making use of several little locations indoors and outdoors which had caught my eye through the course of the day. And as we rose through the levels we started to meet up with other friends and family and build them into the photos as we went. My poor flashes had quite a work-out at this wedding!

And as the evening guests arrived we moved through from the top-floor gallery to another private bar for the evening party, which kicked off with the throwing of the bouquet (top tip: low ceilings require a low and gently-tossed bouquet) and first dance, before everyone else hit the floor. Clearly Christmas was just around the corner, as everyone was already in top party mode! 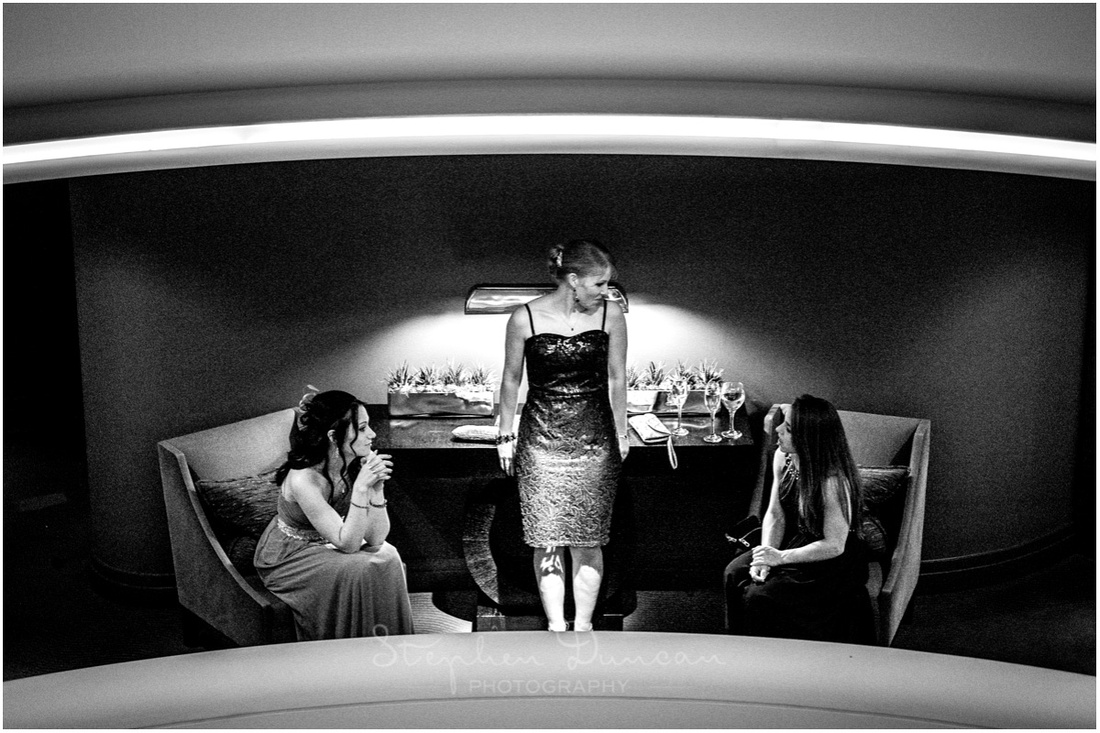 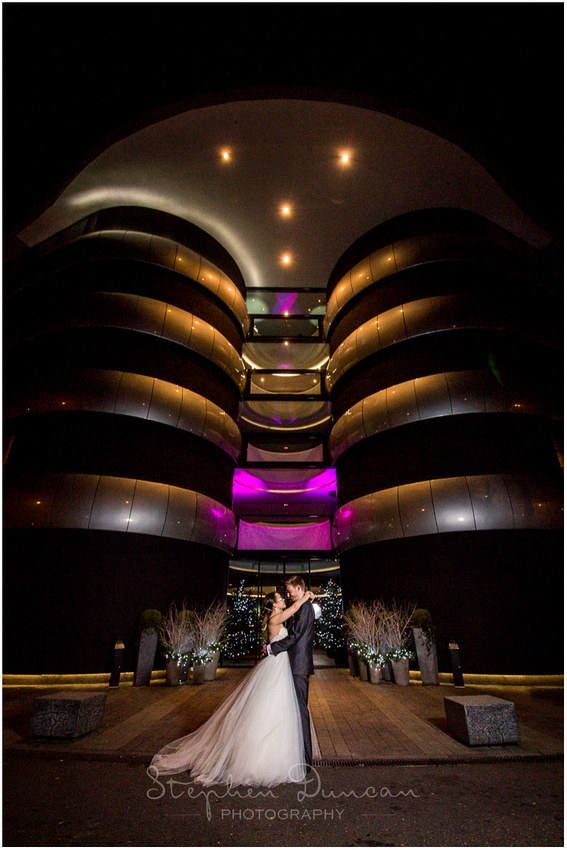 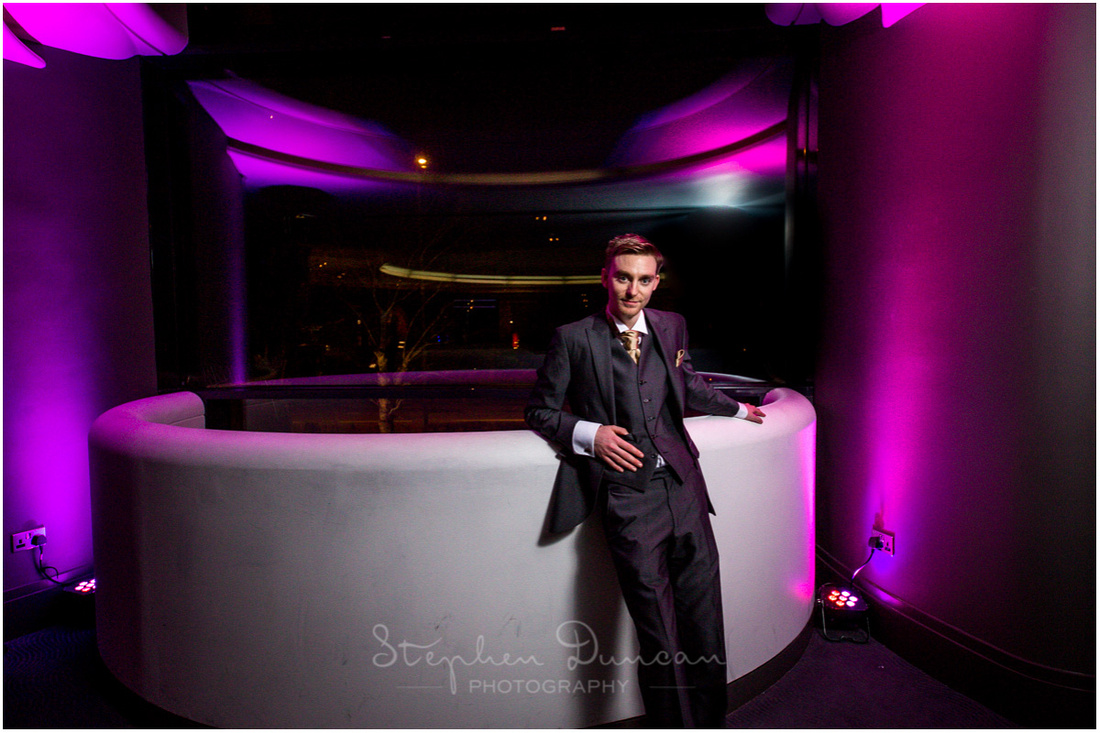 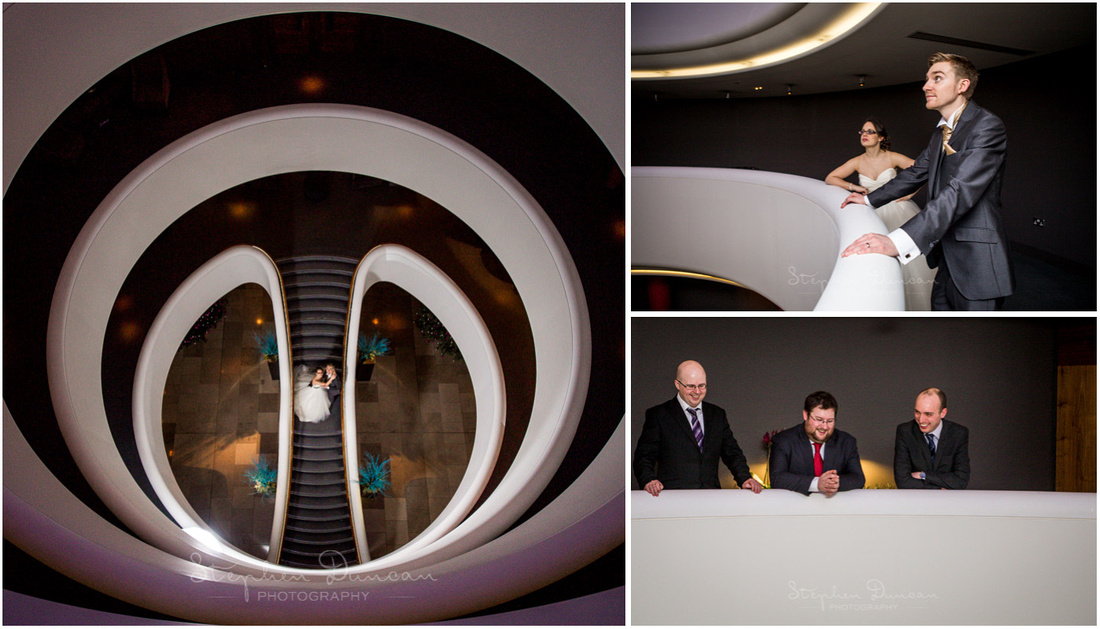 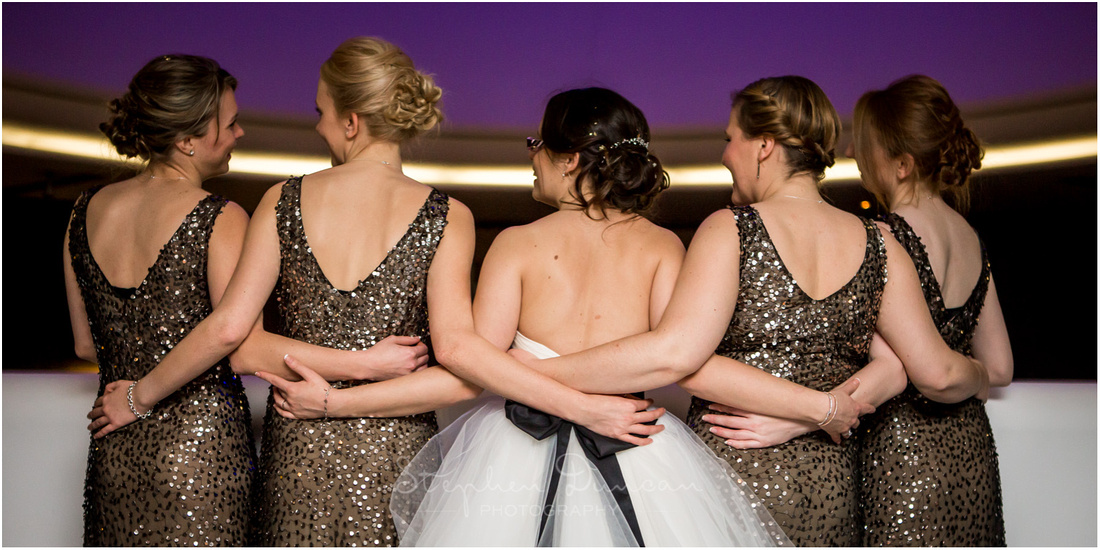 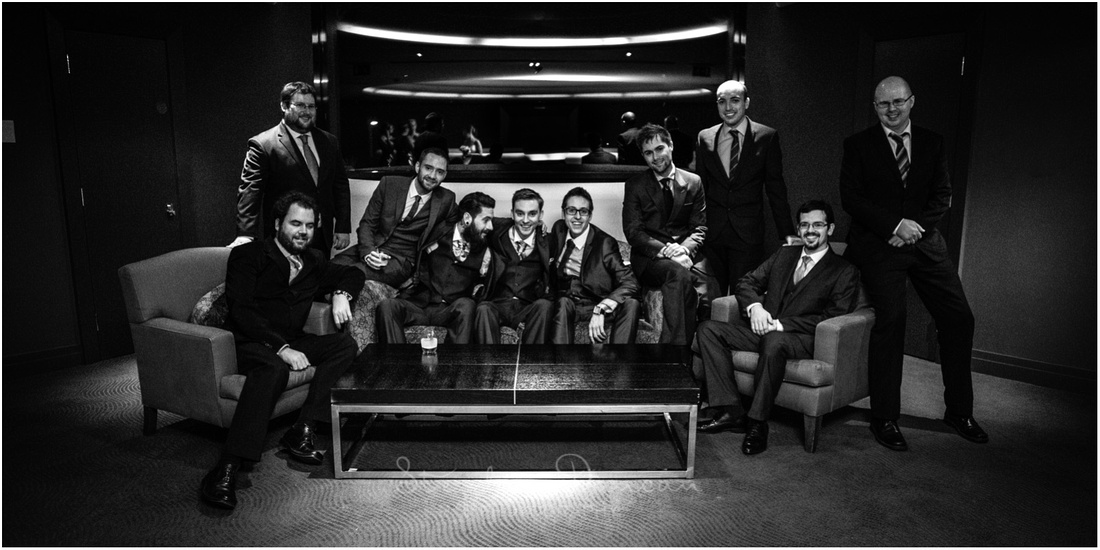 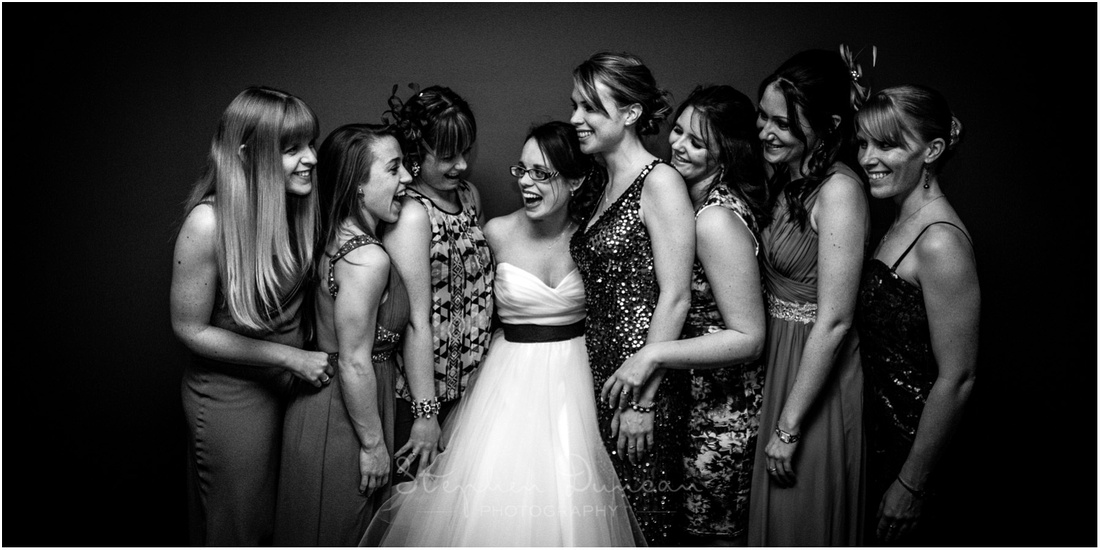 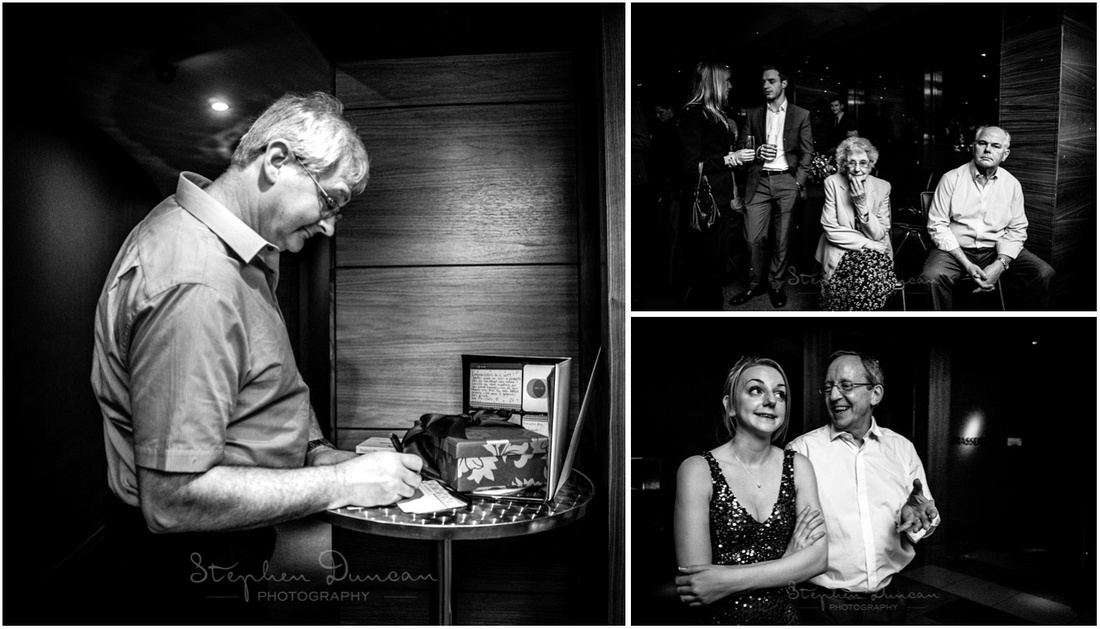 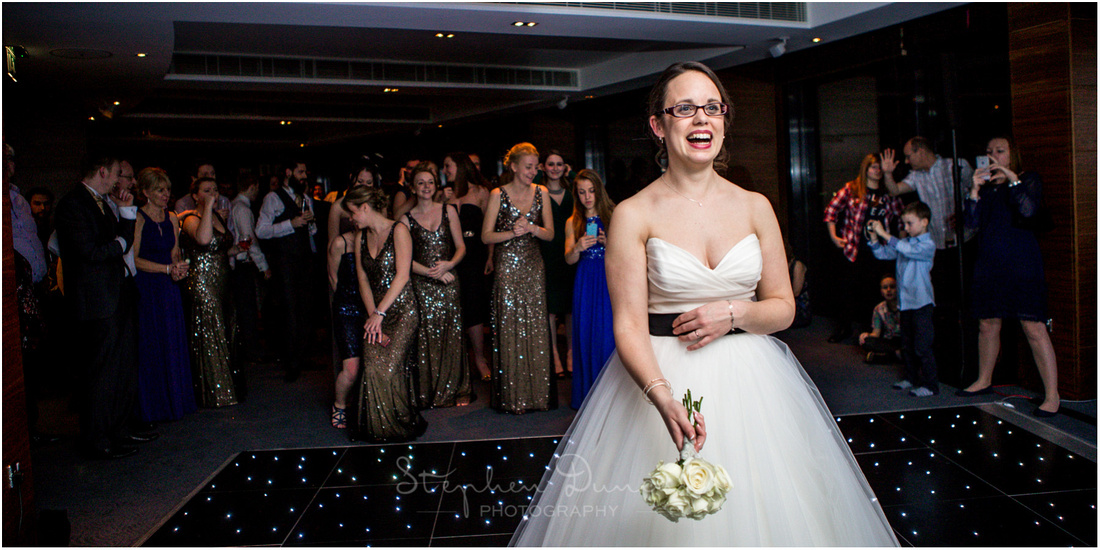 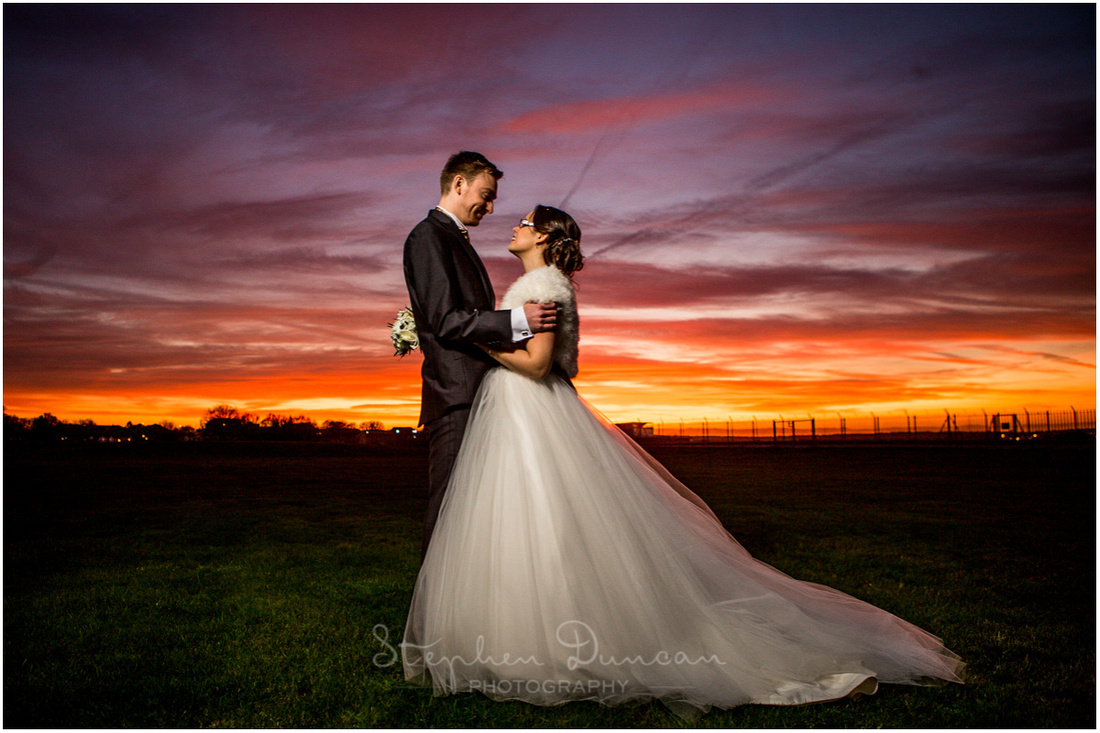 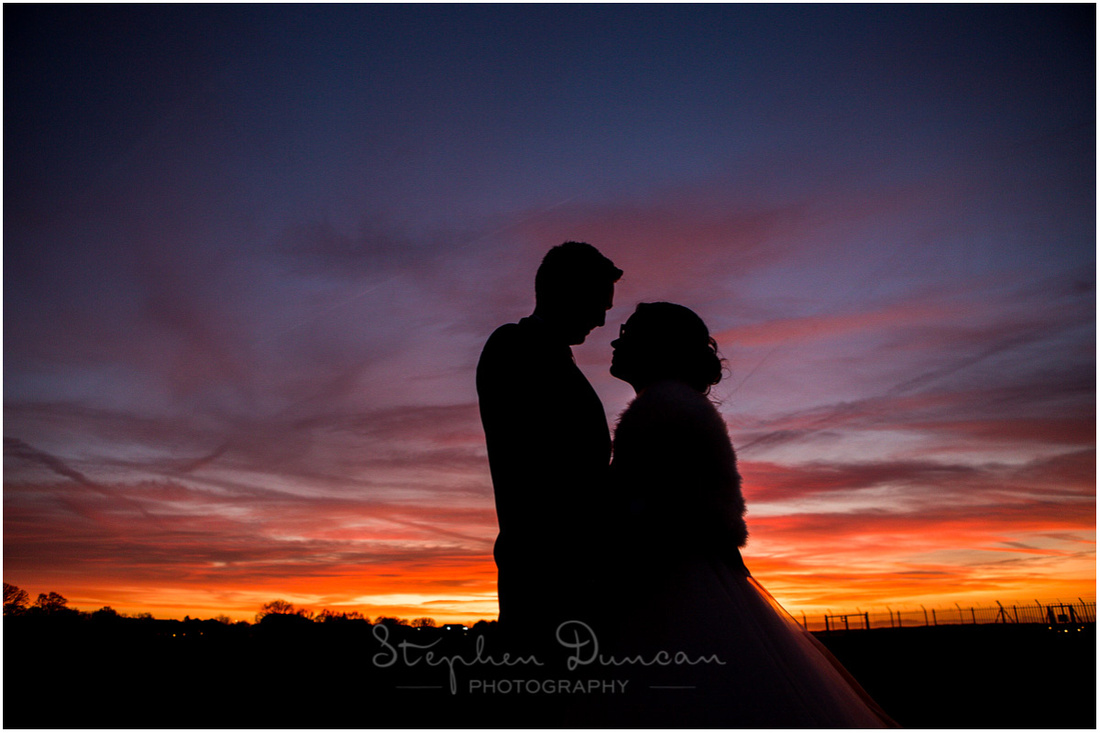 Tasha & Rob's wedding at the Aviator was everything that it had promised to be - an absolutely wonderful day for the two of them, their family and friends, and a fabulous end to a fantastic year of wedding photography for me. If 2015 kicks off anything like the way this one ended, I'm in for a treat!

If you are planning your wedding at the Aviator Hotel and would like to know more about my wedding photography services, packages and prices, please don't hesitate to contact me any time to discuss your plans and ask me any questions you might have - I'm always happy to help however I can.

Hope you enjoyed the photos and, as ever, thanks for reading.

Winchester Wedding Photographer covering all of Hampshire and further afield.